For years, artificial sweeteners have been promoted as safe ways to cut calories and aid in weight loss.

The logic is simple: since obesity has been linked to diabetes, artificial sweeteners must also help with diabetes prevention. However, a new study shows they could actually increase glucose intolerance by changing the composition and function of gut bacteria. The findings were supported by experiments in both mice and humans performed by the Weizmann Institute of Science. They claim, “the widespread use of artificial sweeteners in drinks and food, among other things, may be contributing to the obesity and diabetes epidemic that is sweeping much of the world.”

Most studies linking sugar to health problems have been highly criticized because the government subsidies corn, which is used to make high fructose corn syrup, and ends up in most processed foods. Also, major corporations feel threatened because they know the sugar content in their products are far more than what’s healthy.

Despite protests, the World Health Organization released draft guidelines last year that halved the recommended maximum added sugar intake (10% of daily calories to 5% of daily calories, 200 to 100 calories for a 2000 calorie diet). In response, the International Council of Beverages Associations, whose members include The Coca-Cola and PepsiCo, released the following statement:

“ICBA is disappointed that the WHO has confirmed the conditional recommendation suggesting a further reduction of the intake of free sugars to below 5 percent of total energy intake, as it does not reflect scientific agreement on the totality of evidence…we will continue to offer innovative ways to help consumers to achieve calorie balance through smaller portion sizes, no- and low-calorie beverages and transparent, fact-based nutrition information.”

For companies like Coca-Cola, the solution to the attack on sugar is to replace sugar with artificial sweeteners. Many people think if there are no calories, there is no harm. 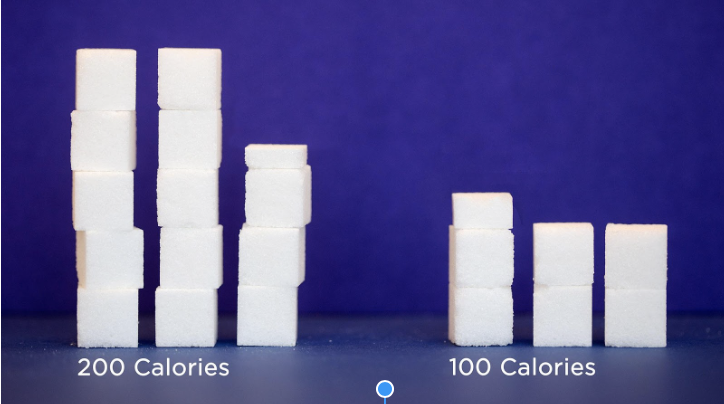 There is confusion over why the use of artificial sweeteners has not been aiding in weight loss. Some studies even show opposite effect. Another interesting fact worth noting is that overweight people often have different bacteria in their intestines than slim people do, but it is not clear what the link is & whether or not bacteria somehow cause obesity or diabetes. However, it has been found that even though artificial sweeteners do not contain sugar, they still directly affect the body’s ability to metabolize glucose. More specifically, they can lead to glucose intolerance: the inability of the body to cope with large amounts of glucose, the first step towards diabetes. 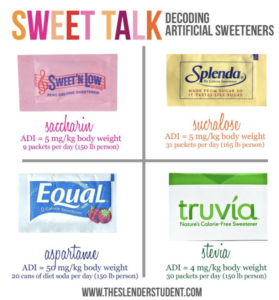 In an experiment led by Dr. Eran Elinav of the Weizmann Institute of Science’s Department of Immunology, and Prof. Eran Segal of the Department of Computer Science and Applied Mathematics, mice were given water laced with 1 of 3 types of sugar substitutes (aspartame, saccharin, sucralose), water, or water with sugar. 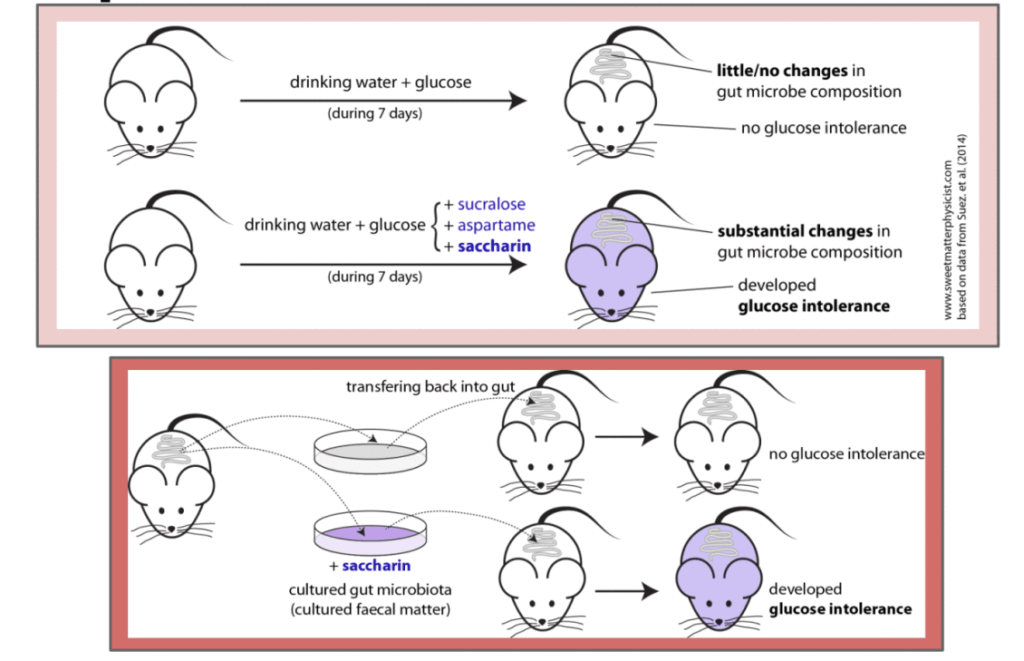 In an elaborate study called the Personalized Nutrition Project, it was found that there was a significant association between reported consumption of artificial sweeteners, gut bacteria, & glucose intolerance.

They also performed a controlled experiment with volunteers who did not regularly consume artificial sweeteners. They asked them to consume them for a week, then tested their glucose levels and gut microbiota. It was found that some, but not all, had begun to develop glucose intolerance. This was because there were 2 different populations of human gut bacteria: one induced glucose intolerance when exposed to sweeteners, and one with no effect either way.

Dr. Elinav believes certain bacteria in guts of those with glucose intolerance reacted to chemical sweeteners by secreting substances that caused an inflammatory response similar to a sugar overdose, promoting changes in their ability to use sugar.

The only real solution to health problems such as heart disease, diabetes, and obesity is healthy eating and exercise.

The current American diet is not healthy, and metabolic diseases will continue to be a concern until Americans drastically alter their lifestyle. Artificial sweeteners are not the solution to sugar, sugar is not even the problem. The problem is the quantity in which sugar is consumed because it is in practically everything! And the current recommended added sugar intake is not labeled as a percent daily value on nutrition facts. And as long as major food corporations have the money and legal ability to influence government policy, there will be little change in the regulation of sugar and artificial sweeteners in foods.

So what should you do?

If you haven’t read my last blog post, you should. Because you’ll learn ALL about what “healthy” really means. Eat plants, eat whole, REAL foods, not ones made in a lab with 10 billion ingredients that you can’t pronounce. I’m a proud host to a healthy gut bacteria population! Besides, real sugar tastes good. Just don’t eat too much.

PSA: What you eat does not determine your worth. 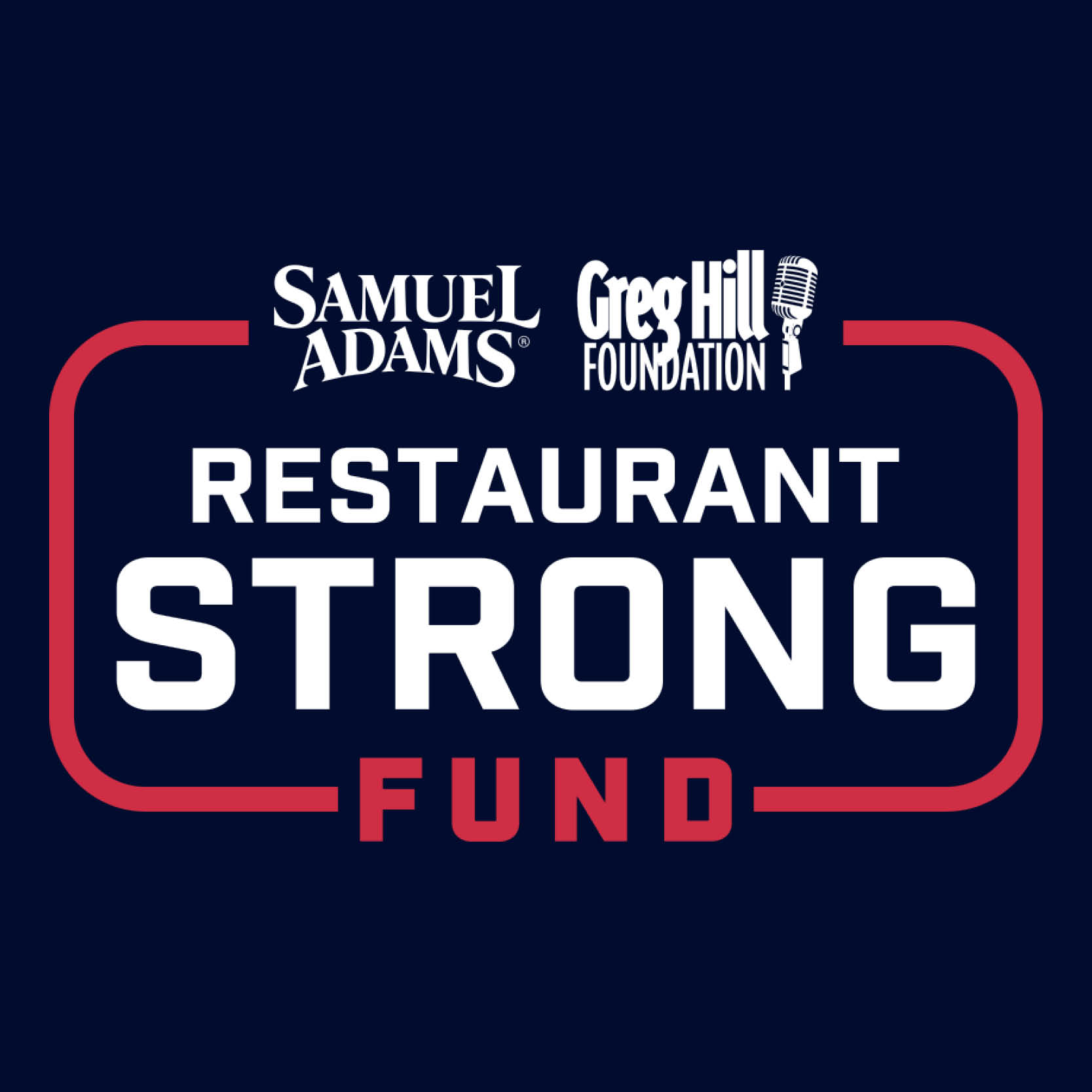 Want to join the discussion?
Feel free to contribute!

Get a strong start to your weekend with these TWO

Our members are working hard here at VIM! 😷 .

***UPDATED VIRTUAL/HYBRID SCHEDULE*** as of Monday

Pair your favorite gym mask with one of these tren

Check our NEW instructor Mandie and her NEW class

Ready to get back into a routine this fall? There

Scroll ➡️ to see some of our clients and train