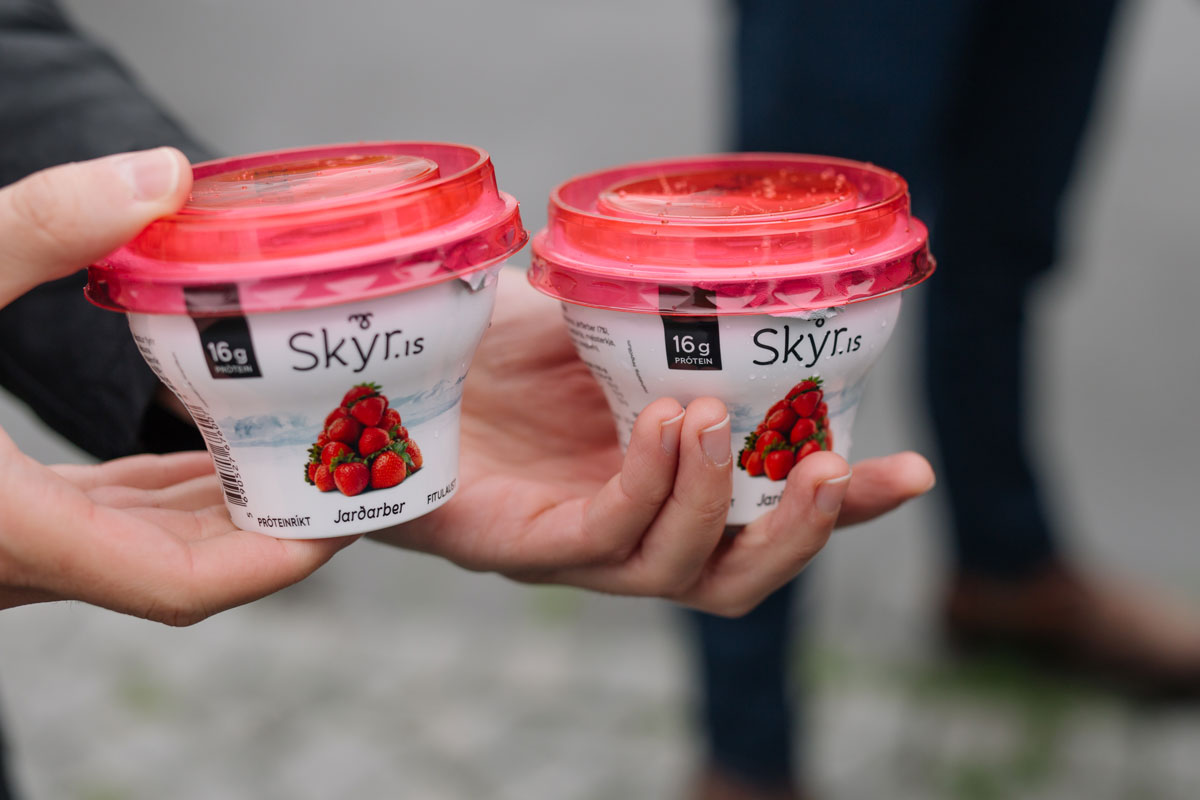 On my recent visit to Iceland, I was able to survey many of the traditional Icelandic foods.

Icelandic lamb or fish stew was offered everywhere for lunch, but I preferred the vegetable option with unlimited homemade bread. The breads, pastries and coffee, all clearly labeled when vegan friendly, kept me full and energized. However, one of the most delicious traditional Icelandic offering was skyr.

Icelanders are wild about skyr—pronounced “skeer,” not “sky.”

They eat it for breakfast, grab one for a quick snack, or use it as the base of decadent desserts with local berries. The Vikings brought skyr to Iceland more than 1,100 years ago. This fermented dairy product was once popular throughout Scandinavia, but in Iceland, it has become one of the nation’s most treasured foods and cultural icons. The writers of the Icelandic sagas mentioned skyr in their myths, and an ancient jar with residue from a batch thought to be more than 1,000 years old is displayed in the country’s National Museum.

Initially, however, the skyr itself wasn’t the goal of the fermentation of the milk—it was the whey the Vikings were after. This acidic liquid was used to preserve meat, but the creamy, filling skyr soon became star of the process. Though first made with raw sheep’s milk, much of the skyr found on shelves today is made with cow’s milk. Since the original recipe involved separating the fat out of the milk for butter before making skyr, most producers today use skim or low-fat milk to make skyr naturally low in fat.

The fruit flavors are the most popular today, but some people still prefer plain. Traditional skyr is definitely more sour than the fruit-flavored ones, but it’s lower in sugar and an excellent source of protein. Like Greek yogurt skyr is thick, but it’s actually considered a fresh, acid-set cheese, like quark or fromage blanc. One of the differentiating factors between the two foods is bacteria. The label “yogurt” applies to products made with either Streptococcus thermophilus or Lactobacillus delbrueckii subspecies bulgaricus, whereas skyr is made with a wider variety than just these two bacteria. The other difference is the straining step. Yogurt is good to go after fermentation is complete, but to finish a batch of skyr requires straining it through a cloth or using a centrifuge to separate out the whey and concentrate the protein. This straining is what makes for such a thick result. The resulting skyr is virtually fat-free, low-calorie and high in protein.

Whether it’s called cheese or yogurt doesn’t change skyr’s place in the hearts of the Icelanders.

From cameos in the sagas to the present-day invasion of Whole Foods’ dairy cases, despite some of the exotic foods visitors associate with Iceland (putrefied shark, anyone? smoked puffin?), the most Icelandic cuisine of them all is a humble dish of skyr.

VIM ambassador Nick reminding everyone that we hav

We have even MORE reasons for you to join our VIM

WEEK SEVEN of our WORKOUT OF THE WEEK!! . Every We

GET A ONE MONTH FREE TRIAL OF SMALL GROUP TRAINING

Out of shape or just out of ideas? Refresh your wo